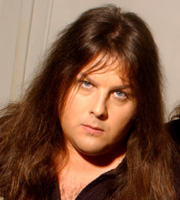 © Symphony X
Michael Romeo, guitarist of the progressive-metal band, Symphony X, is not only a great player. He's also a talented user of the home-studio. Computers helped him to compose the epic songs of the latest Symphony X album, Odyssey.

Guitariste : Can you describe your latest album, Odyssey ?

Michael Romeo : The preceding album, “V: The New Mythology Suite” was a concept album. It was very polished, flowing, very melodic. We wanted to get back to the roots with heavier guitars. Of course, in Odyssey, we still have very melodic songs like Accolade II with piano. The title track of the album is a long piece (24 minutes !) with an orchestra throughout. It's still progressive music, with melodies and epic parts. But we wanted it to be heavier.

Michael Romeo : We recorded in my own studio at home. Like many other musicians, I use Nuendo software, from Steinberg. I have three computers. The first one runs Nuendo and records tracks. The other two run the virtual instruments for the orchestration. In fact, for the recording of the album Odyssey, I only used one PC. But now I work with three PCs, since playing orchestra sounds demands a lot of power.

Guitariste : What kind of samples do you use ?

Guitariste : Can you give us some details on your gear ?

Michael Romeo : I have a Mesa Boogie Duo Rectifier and other amps. For Odyssey, I also used the Pod Pro amp simulator, for clean sounds. I like it, because you have many options in a small unit. For a while, I was satisfied with the Pod, but now I have the Line6 Vetta. At first, it's a bit more difficult to use. But wow, it's better. The sound is really great !

Guitariste : Do you have any favorite microphones ?

Michael Romeo : Sometimes I use an AKG 414, sometimes a Shure 57. It depends. I run the microphone into an AMEK 9098 preamp, which has a good equalizer. And I record it directly onto the computer. For the vocals, we used the AKG 414 model most of the time.

Guitariste : Do you apply effects ?

Michael Romeo : No. Before it goes into the computer, we don't really use effects. Maybe a little compression, but that's all.

Guitariste : How do you record your solos ? Do you record many takes, in order to select the best ones ? What about re-recordings ?

Michael Romeo : Of course, there are overdubs in our songs, for the solos. But not too many. We didn't want to go too crazy. Over the years, I've tried to do fewer and fewer takes for my recordings because I think the energy is there the first couple of times. When you play the same part too much, it becomes mechanical. In fact, I don't even know if there are any “first takes” on the Odyssey album. When I create a solo, I try to improvise as much as I can. I record it and listen to it carefully. Let's imagine that I find the beginning cool, but I don't like the end. Then I record it again, and aim to keep the thing alive. I could do many takes, but I don't want to.

Guitariste : In a cut from your third album, "The Divine Wings of Tragedy", several instruments come one after the other and follow their own rhythm. It's only when the drums come in that you feel the unity of the whole.

Michael Romeo : I see. You're talking about Accolade.

Guitariste : Right. The result is great. Did the home-studio help you to find this kind of idea ?

Michael Romeo : Well, when you are writing your song, you can experiment with the computer. So you can find the best way for the different parts to come together. And we spend a lot of time writing our songs.

Guitariste : Do computers affect the way you compose ?

Michael Romeo : I don't think so. Things just go faster. In the old days, you had a four track recorder, a little drum machine. When you wanted to extend a solo, you had to record and listen again. Now, you just have to cut and copy it. When you prepare a demo, it's easier to change something and get different versions. When we record in the studio, we want the computer to remain just a recording tool. The computer is interesting for the composing process. But we don't use the machine for fixing a solo, for example.

Guitariste : How have you practiced guitar over the years ?

Michael Romeo : When I was younger, I took classical guitar lessons for a while. I wasn't too bad. I love classical music, but I wanted to play in a band instead of spending hours working on the pieces. I worked a lot on shredding stuff, techniques, scales, arpeggios, tapping, etc. I concentrated on being able to do that. I listened to many musicians like Al DiMeola, Uli Roth, Yngwie Malmsteen, Allan Holdsworth, Frank Gambale, that kind of stuff. Rhandy Roads was also a big influence. Eventually, I started to play more and more complicated chord changes. This kind of study helps to find which scale you can use on a G13 chord, for example. Here, I know I can use the mixolydian scale, or whatever. You approach the solo chord by chord. It's a rather jazz approach. It takes a lot of time.

Guitariste : But technique isn't everything...

Michael Romeo : I practiced with drum loops for hours and hours. But over the years, when you get comfortable with how you can play, you really have to focus on the music itself. When I approach a solo, I know I can do technical things, but I don't think, “let's put an arpeggio here.” The technique must become just a tool. You can play fast, you can play slow... it doesn't matter. The most important thing is how you express your song.

Guitariste : Does the world environment influence your music ? I'm talking about September 11th or the War in Iraq.

Michael Romeo : No. There are so many tragic things in the world. For me, music is an escape from that. Music is like a journey, going to another place. I'm not interested in politics. I'd rather paint pictures with my music.

Guitariste : Internet allows people to find tabs of mp3s of your band. What do you think about that ?

Michael Romeo : I don't agree with the fact that you can download a whole album, maybe one or two songs at the most... But with internet you can get lots of information about bands, scores... That's very good.